10 years ago, those of us on fairly new medium, the world wide web, turned all our pages black for 48 hours to protest an internet censorship (the Commincations Decency Act) actl Bill Clinton signed.
Read about it at:
* 48 HOURS OF PROTEST *
Wikipedia

Now with the threat of the removal of net neturality, it may be time to do it again.

I think that ordinary people who use the internet don't know what a big deal this is. They don't know that small businesses they go to on the internet, family web pages, netroots pages, church web pages, schools, clubs, games, game and tv fandom, support group webpages, memorial webpages (like the suicide memorial wall linked to on this blog), small ISPs, etc, websites will be third tiered if they can't pay. Third tiered means that these sites will take more time to load and possibility be unavailable at times, while sites that can pay the big money (Amazon, Ebay, etc.) to cable and phone companies (Verizon, AT&T, Comcast) will be first tiered. This means that their downloads will be fast, always available an uncorrupted. It also means that blogs, whether left or right will be third tiered too.

Also, when these first tiered companies make their huge access payments, who do you think with ultimately pay for it?

So maybe, to bring this threat home to the Average Joe, so he/she will see h 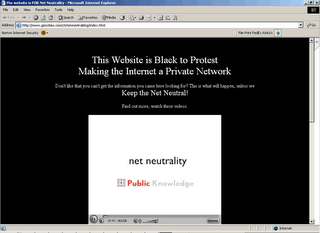 ow this will affects them we need to have another black page protest.

It could look something like this:
Take a closer look here


If you, at this point have no idea what I am talking about, view these videos: See also Moby the Christian Coalition, ACLU, Google, Amazon, and eBay

Get this video
Save the Internet 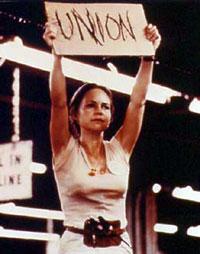 Okay, that's it!
I've been pissed off for so very long.

I've already said in many places that I agree with Randi Rhodes, that the Republican party and those who are benefiting the most from this administration are the robber barons of the 21st century. (Hey, how's that $9.00 tax cut working for you, or how about that people earning $40,000 pay no taxes. You who earn $40,000 how are those no taxes your not paying.).

From mining accidents, to the undermining of OSHA, HUD, workman's comp, and all the rest, and e the gap between rich and poor get larger and the middle class is under assault -- this was probably the last straw.

Unionfacts.com should actually be called unionfiction.com. The website is owned by Rick Berman, "a right-wing lobbyist who has built a lucrative career establishing industry-funded front groups" (Center for Media and Democracy)

This administration rewards greed, and removes protections for American workers and their safety (recent mining accidents being one example). The idea that tax cuts to the rich insure a stimulation of the economy is bogus.

There is no guarantee that those, who are at the apex of the economic pyramid, and who receive the biggest tax breaks, will invest in this country. And they actually aren't. They are investing in China and India and exporting our jobs. Allowing them to get richer

Larger tax breaks to the poorer base of the economic pyramid are more likely to stay in country. Unless it is sent out of the country to support a family left in a developing country, middle class and lower class people are most likely to spend money in country, thus creating more demand. They are also more likely to have in country savings accounts. How many off shore, tax evading, bank accounts do the poor and middle class have?

Now I was raised in a rather anti-union house growing up, but it has become increasingly clear that this administration has no problem rolling over the middle and lower class, and removing protections for Regular Joes. So I need to have a group in my corner, and that would be a union (I’ve also donated to PACS, etc.).

So today I joined 2 unions!

I probably wouldn’t have remembered or have been angry enough to stop what I was doing and join. But I did. And I encourage you to do it to, even if it’s just as an associate.
Posted by Clytemnestra at 11:36 AM No comments:

Formal Request from a US Citzen for UN Observers

Okay I found Rove's statement about the Republicans being fine in the Novemember elections really, really, scary.

So I went looking on the internet and found this Formal Request for UN Election Observers, by Marc Perkel Rantz.

So I just re-wrote (I've sent a request for permission) and am posting. And this may be something that others to copy and post on their blogs, to help create a momentum for oversight (something Republican's seem to be allergic to).

As a citizen of the United States of America - a nation that is supposedly "of the People, by the People, and for the People" and I request that the United Nations formally observe the U.S. elections on Nov. 7, 2006.

I therefore, formally request that all interested nations to send election observers to monitor the November 7, 2006 US elections.
Posted by Clytemnestra at 9:50 AM No comments:

It Will Be a Green Summer

Atleast 2 movies are coming out this summer with overriding "green" themes. And they should compliment each other very nicely.

The first movie is "An Inconvenient Truth"

For more information see http://www.climatecrisis.net/ Pledge to see the movie

The other movie is "Who Killed The Electric Car"

The trailer is embedded on the site

I hope both these films are well attended by middle schoolers on up, and that they provoke discussions with in the family, among friends and in the classroom next school year. I also hope that will change the way many people view this government and cooperations and their greedy, irresponsible behavior.

Much like the movie "Supersize Me" changed eating habits for many (I know in this house my kids stopped asking for cookies and chips, and started eating more salads and fruits) these movies may change enivormentally harmfull habits.

Early in April 2006 I had to purchase a new car. Though I looked at several cars from US manufacturers, my top three choices were a Honda Accord, Nissan Altima and Toyota Camry. Cars built by American manufacturers just didn't have what I wanted, from a locking door for the gas cap, to side curtain air bags, to decent fuel economy and possible hybrid technology. Cars from the "American" manufacturers even got another mark against them when I found out thru Kelley Blue Book that Chevy, etc. were assembled in Canada. Honda, Nissan and Toyotas cars were assembled here in the US. So to support US workers I had to buy a "foreign" car.

I also looked for a hybrid, but Toyota's hybrid Camry wasn't due out until May, and I needed a car immediately. Missan didn't have one and Honda's was $10,000 more than I could afford.

I bought the Honda Accord. There are many more reasons why that I will not go into in this posting. But one of it's greatest selling points is that it is a Partial Zero Emission Vehicles (PZEV).

It's important to me.

Posted by Clytemnestra at 6:25 PM 2 comments:

Wish Them a Happy Mother's Day

When you call your mother to wish her a "Happy Mother's Day" don't forget to wish those mothers at the NSA a happy day too.
Posted by Clytemnestra at 11:17 AM 1 comment: