It's Been a "Billy Joel Week"

It's Friday and I've needed three Billy Joel songs to get me through this week. Enjoy


Posted by Clytemnestra at 9:14 AM No comments:

It's Time for Guerilla Media

In a time when 40% of the population still believes that Iraq and Saddam Hussein had something to do with 9-11 and Valerie Plame was not covert, and the MSM will not disabuse our citizenry of that falsehood, it's time for the type of alternative media practiced in the 1960 and 1970s.

We tend to rely on the web, talk radio, mainstream newspapers and tv. Bust we forget that there are more ways to get the news across.

In many states advertisers stick flyers under windshield wipers of cars where their owners are inside a mall. Why not use that to inform people about the truth? Take a flyer to Kinkos, Office Max, Staples, etc. and $20.00, run however many that will buy and then go to a parking lot and paper the cars, or while people are at work stick a flyer at their front door (do not put it in mailboxes, that's a crime).

Those who know will understand what and why about the flyer. Those who don't, may actually learn something. And those who don't know who might get violent when presented with the truth, well you won't be around.

Always put on your flyer a place on the web can look up the truth. Make sure that at least one of your citations is from a place that even a hard core rightie can't dismiss, like say, from the White House, itself. Make sure that citation is the first one.

Here's an example:
Iraq and Saddam Hussein had NOTHING to do with 9-11

Q Mr. President, Dr. Rice and Secretary Rumsfeld both said yesterday that they have seen no evidence that Iraq had anything to do with September 11th. Yet, on Meet the Press, Sunday, the Vice President said Iraq was a geographic base for the terrorists and he also said, I don't know, or we don't know, when asked if there was any involvement. Your critics say that this is some effort -- deliberate effort to blur the line and confuse people. How would you answer that?

Then include (you might want to put a box around each one).

BUSH: The terrorists attacked us and killed 3,000 of our citizens before we started the freedom agenda in the Middle East.

QUESTION: What did Iraq have to do with it?

BUSH: What did Iraq have to do with what?

QUESTION: The attack on the World Trade Center.

BUSH: Nothing. Except it’s part of — and nobody has suggested in this administration that Saddam Hussein ordered the attack. Iraq was a — Iraq — the lesson of September 11th is take threats before they fully materialize, Ken. Nobody’s ever suggested that the attacks of September the 11th were ordered by Iraq.

This many be all you want to cover in this flyer. It maybe enough to cause some righties to start thinking. And it may cause some heads may explode.

But if the fourth estate refuses to tell the truth. Then we have to.

(In all cases check what's legal in your state, city/town.)
Posted by Clytemnestra at 12:49 PM No comments:

I've been listening to Cenk Uygur on The Young Turks this morning, all morning including the "after show" show. I rarely do that, I normally switch to Stephanie Miller at 9am ET. But today, and due to the fact that Stephanie Miller and the mooks are on vacation and I needed someone to voice my anger and frustration.

I like Elaine Bossler, but Cenk was/is my voice today.

I. Lewis "Scooter" Libby's sentence was commuted to no jail time yesterday. We know that in the last few days of his presidency, Bush will pardon him. The robber barons, and their privileged aristocracy rules. The two tiered justice system, laid open for Paris Hilton, is now not only open but laid bare.

During this morning while listening I have perused DailyKOS, Crooks and Liars, Americablog and Pandagon. And I have been writing letters, lots of letters, in frustration and anger.

The Republicans may dance over this but they only expose how hypocritical they are.

During the Clinton impeachment they trumpeted how the rule of law was important. They said, along with their mouthpieces, Rush Limbaugh, et al. that Clinton lied under oath and that that in itself is important. They poo-ed poo-ed and brought in lawyers to rebut Democratic operatives who said that it was no big thing.

So now that it’s a Republican in trouble, who lied under oath, they have switch to “it’s no big deal.”

At the very least even with all that is going on, stop being hypocritical over this ONE thing.

HE LIED UNDER OATH. He should bare the consequences of that. And don’t whine about the sentence being excessive, it’s was within the sentencing guidelines. Guidelines Republicans used to trumpet as being the equalizer between rich and poor, powerful and downtrodden. Guidelines meant that all would be sentenced equally and removed discretion from judges. And on appeal Republican judges up held Libby's sentence.

Ordinary Americans, Republicans and Democrats, who lie under oath are sentenced under the same guidelines.

Don’t point to me that Clinton did pardon and commuted sentences. I didn’t support Clinton during that time. It's not an equal anology or comparision because people had already served time before the pardon, including Susan McDougal.

Those who make that argument are making a child’s argument and showing intellectual dishonesty and contempt for the American public.

It’s time to impeach. If Pelosi doesn’t see that then she needs to be removed. Beyond making flowery speeches telling the public how much this displeases the members of the House and the Senate, we need to implore them to do something tangible and meaningful. It doesn’t matter if Democrats think they can or can’t get it through, the fact of the matter is that they did something, and they tried.

On Sunday at 12 noon PDT Cenk is going to the Federal Building in L.A. and hold up a sign saying “ENOUGH!” He suggested we all do it, around the country at the city halls or federal buildings where we live. So on Sunday I will make an effort to get to the Federal Building in Boston with my sign “ENOUGH!” – and if I can’t get there, maybe the city hall here will be sufficient.

Bringing Back the "Momma Chair"

Twenty plus years ago I worked at the library (Penrose) on the University of Denver campus. Now Penrose is not a particularly beautiful building, there are many modern structures that are prettier. In fact Penrose is downright ugly, especially when you look at all the older and new buildings around it.

There was/is even a sculpture in front that no one knows what it is. We called it "the Paperclip." 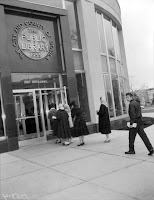 libraries. I love to be inspired by the outside as well as the inside main floor of a library. the utilitarian feel of many public libraries in Denver during the 1960s - 1980's really turned me off. Except I have a growing fondness for the airy, 1950's brutalism of the "old" main library (1955-1995).

Massachusetts, by contrast, seems to understand the emotional connection to the building called the "library." Even when a community needs to expand it's library or make it wheelchair accessible, the imperative seems to be to save the original structure in all it’s beauty.

But I digress, back to Penrose.

In the employee lounge there were these huge black foam chairs. They were probably once all over the library, but in the 1980s they resided just in the employee lounge. They weren’t pretty, but these chairs were some of the most comfortable around, and if you weren’t careful you could overstay your lunch hour and fall deeply asleep. 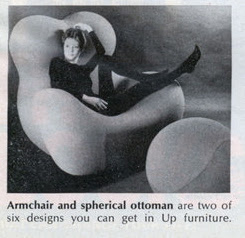 One of my co-workers came up with a reason these chairs were so comfortable is that they were based on a mother’s lap, with the mother sitting cross legged. The breast forms at the top where one could rest their head, literally in the cleavage. The “mother’s” thighs made up the arms of the chair, and a little tummy pounch, which just happened to support your back.

Once we all looked at the chair as a whole, we knew he was right.

If they bring back these chairs, buy one. If you ever have a chance to sit in one, take it!


see also:
Modern Machanix
1970: Foam Furniture Rises Like Bread
Posted by Clytemnestra at 9:23 AM No comments: