The headline says Pentagon blames Iran for 170 US deaths. Okay that's possible, just about anything in this world is possible. 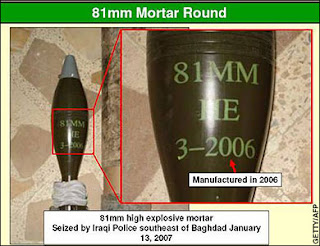 But then you look at the pictures of the supposed ordience and things jump out at you. Like why in a country that is very proud of it's national language is the lettering AND the numbering in English characters?

Farsi and Arabic numerals, like letters and words are read right to left.
Moreover, why are the "Iranians" using the Christian year? On the Islamic calendar the year is 1428 (A.H. = After Hijra) not 2006.
Hopefully, this set up is so obvious that Middle America Red State Republicans can figure it out.

Last night I was told that the reason bombs are marked in English is due to international treaty. Okay, but how do we know that Iran is compling with this treaty? Why would they, so that the American government can futher it's case against them? And haven't they been scoffing at these treaties anyway? .

Further there is nothing to say that ONLY English marking can appear on a bomb.

It would seem to me that in a country whose written language is not based on the same alphabet English, Spanish, French, German, etc. is based on and a country very proud of it's theocracy, would at least agument it's "stamping" of the bomb with either Arabic or Frasi.

I still don't buy that this came from Iran or that the Iranians made it. It seems more "aluminum tubey" to me.
Posted by Clytemnestra at 9:19 PM 2 comments: Links to this post