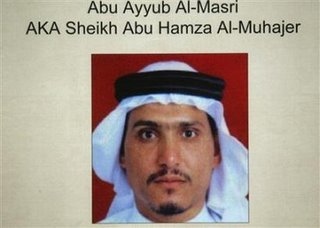 I was listening to Air America Radio this morning. Rachel Maddow was commenting on the photo that the US military had of Abu Ayyub al-Masri, alias Sheikh Abu Hamza al-Muhajir (the new al-Qaida leader in Iraq).

She felt that al-Masri (al-Muhajir) had been invented because, no expert in terrorists from Egypt had ever heard of him. She felt that Bush administration and military leaders believe we need a bad guy to rally against, so they invented him. The photo of "him" she contends, has been through "Photo Shop."

So I looked at the photo myself. . . Shazzam! It looks like the left side of the face is from a completely different person than the right side!

Seriously, the right eyebrow, moustache and beard is bushier and thicker than the left side. In fact the left eyebrow looks sculpted (think tweezing or waxing). The "mono" brow protion looks off too.

And if that weren't enough the left nostral is far smaller than the right.

hmmm Rachel may have something!
Posted by Clytemnestra at 5:52 PM 5 comments: Links to this post

The Need for Unions Explained 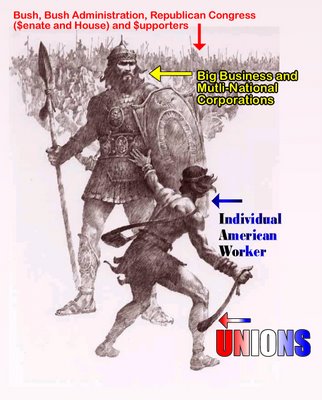