Star Spangled Banner in MANY Languages - Think Progress Should Add These

“But, Mr. President, I’m afraid the message is, quite literally, getting lost in translation. As part of these demonstrations, a new version of our national anthem, the Star-Spangled Banner, has been produced – in Spanish. “

According to an article in the Washington Post last Friday, at least 389 different versions of our anthem have been produced over the years, in many musical styles, including rock and roll and country. But, the Post also noted, never before has it been rendered in another language. -Thus Sayeth Senator Lamar Alexander

Think Progress revealed that indeed the Star Spangled Banner had been rendered in Spanish in 1919. But they didn't go far enough to take the Post and Alexander to task. A little research before provoking their base would have stopped them from making such a stupid statement (but hey, we like when Republican/Neo-Cons make stupid statements.)

Today, with time I didn't have earlier the week, I found that it has been rendered in many languages. Lamar and the Post should fire the have people who's job it is to do fact checking.

The Star Spangled Banner has been rendered in:
Chinese
Gaelic

And because of the flap over the Spanish version, the Star Spangled Banner will be rendered in Klingon!

Posted by Clytemnestra at 9:54 AM No comments: Links to this post

Anatomy of a Republican

http://republicananatomy.cf.huffingtonpost.com/
Posted by Clytemnestra at 3:31 PM No comments: Links to this post

Two causes YOU should get involved with

S.1955 Could End Insurance Coverage for Mammograms
Your U.S. Senators Must Be Told to Vote NO on S.1955

Congress is pushing a law that would abandon the Internet's First Amendment -- a principle called Network Neutrality that prevents companies like AT&T, Verizon and Comcast from deciding which Web sites work best for you -- based on what site pays them the most. Your local library shouldn’t have to outbid Barnes & Noble for the right to have its Web site open quickly on your computer.

Net Neutrality allows everyone to compete on a level playing field and is the reason that the Internet is a force for economic innovation, civic participation and free speech. If the public doesn't speak up now, Congress will cave to a multi-million dollar lobbying campaign by telephone and cable companies that want to decide what you do, where you go, and what you watch online.

This isn’t just speculation -- we've already seen what happens elsewhere when the Internet's gatekeepers get too much control. Last year, Telus -- Canada's version of AT&T -- blocked their Internet customers from visiting a Web site sympathetic to workers with whom the company was having a labor dispute. And Madison River, a North Carolina ISP, blocked its customers from using any competing Internet phone service.
Posted by Clytemnestra at 8:39 AM 2 comments: Links to this post

Of Lower Standards, Urban Warfare and US Street Gangs in Iraq

Two years or so ago I commented on Americablog about my concern for US soldiers coming back from Iraq and their psychological welfare. As the ex-wife of a Vietnam veteran the issue is of interest to me.

Will these men and women who served our country receive the mental help they need for them to get through the horrors that they've seen and allow them to be fully functioning members of society? Or will the government once again cut the benefits these who've risked so much for this nation deserve in full?

Well we already know that the Bush government/administration, while risking no family members themselves, are cutting back and/or not fully funding necessary services for those who have served. The president who can afford to privately pay for his own medical insurance and doctors, receives the finest tax payer funded care. He always will.

What I did not think about when raising my concerns is that when the military lowered it standards to try and reach recruiting goals, that meant letting in gang members. These gang members are more than eager to "serve" their country.

All that training in urban warfare, house to house fighting, sniping, suppressive fire, kill zones, explosives, not to mention field medic training. Our modern paramedics came from the medics in Vietnam. So successful was it to have on the scene medical help, that more soldiers survived. Bring that lesson home and ambulance ride became more than just loading the injured into the back a converted station wagon. It became, in some cases, a fighting chance to live.

The medics in Vietnam brought back their training for use at home. What do you think gang members, learning urban combat tactics will bring back from operations in p 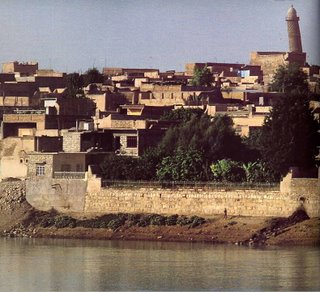 Don't think a gate community will save you either. Ever see what towns/cities in Iraq look like? Here's Mosul:

So while this brewing problem goes under and un-reported (another case of our lap dog media) do you think a Republican controlled government will help pay for the domestic devastation these military trained gang members in an unnecessary war, will cause? (At any other time they'd be vetted out).

Think Progress did a fact check and found 4 different Spanish versions of the Star Spangled Banner the first has a 1919 copyright. And guess where they are; the United States of America State Department web site!

So 87 years ago during the Nadir of American Race Relations a specifically multicultural, inclusive project was commissioned by the U.S. Bureau of Education.

And in doing so the Post and Senator Lamar Alexander are wrong asserting “According to an article in the Washington Post last Friday, at least 389 different versions of our anthem have been produced over the years, in many musical styles, including rock and roll and country. But, the Post also noted, never before has it been rendered in another language. "

And you know what, why not? One may learn English, but speak another language at home. What better way to write the words on ones heart, but in the language of ones birth.

So in "official capacites," YES! sing it in English. But to write the love of country on ones heart, sing it in the language of your mother, your father, in whose arms one first learns about love and meaning.

see also
Star Spangled Banner in MANY Languages - Think Progress Should Add These
Posted by Clytemnestra at 12:20 PM No comments: Links to this post 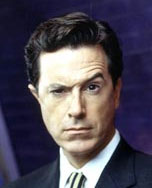 Stephen Colbert's bit at the Washington Correspondence Dinner is probably one of the hottest forwarded links among progressives.

My husband, kids and I found it hilarious. Yes I know that right wing is panning it, and the MSM is ignoring it but really it was brilliantly done. It also occurred to me this morning that the only one who could have done sent this message to the MSM and the White House was a Colbert or someone like him.

In the age of "play or pay" white house reporting, to expect a reporter to go after this administration is probably expecting too much. No matter how much he or she might like too, their immediate bosses or the network CEOs will not allow it. Even if they do, the segment is likely to never see the light of day. We were warned about this happening in the 1980's when everything began trending to make network news a business.

What we'd like the MSM to do at a press conference really can’t be done now, with the exception of Helen Thomas. Softballing is all white house reporters can do until the tide turns on a president, and even then it seems to err on the side of the President. There probably will never be another Woodward and Bernstein, and to that end what happened Saturday night could only be done by a Stephen Colbert; a satirist, not a journalist.

So it was really gratifying to see that despite being lambasted by the right and ignored by the MSM, Stephen Colbert got props from Jon Stewart and a "Standing O" at his show.

Posted by Clytemnestra at 7:41 AM No comments: Links to this post