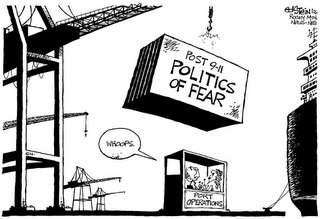 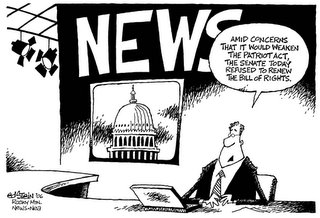 http://cfapp2.rockymountainnews.com/stein/
Posted by Clytemnestra at 4:51 PM No comments: Links to this post

So is Missouri saying that the Framers of the Constitution did NOT know what they were doing?

The legislation will not protect minority religions and but will protect the minority's right to express it's belief.

Is this Christofacism? Is Missouri to be the home of the American Christian Taliban? Or will Missouri become one of those target states like South Carolina and New Hampshire, with many from an non Christian religion moving in to become the majority with full protections under a law they passed.

Remember when the Republican party was the one for states rights?

WASHINGTON - Hundreds of warnings on food labels could vanish under a measure moving toward approval in the House.

The bill would stop states from adding warnings that are different from federal rules. States currently add hundreds of extra warnings, indicating the presence of arsenic in water, mercury in fish, alcohol in candy, pesticides in vegetables and more.

"This legislation could overturn 200 state laws — laws that the American people rely on every day to ensure the safety of the food they eat," Rep. Henry Waxman D-Calif., said Thursday during House debate on the bill.

But never fear a state can petition the federal government to put the warning back on the problem food, further evidence that big government is "over"

jaaaa right
Posted by Clytemnestra at 6:50 PM No comments: Links to this post