When Fantasy and Reality Collide: Dolores Umbridge and Leslee Unruh

This past week Pandagonians (those that comment on Amanda Marcotte's blog, Pandagon) spent much time and considerable humor posting comments about Leslee Unruh's insane rant on Lybrel. It is a birth control pill the FDA approved recently that the Christian right hates. It simply stops a woman from having her period, and there by (according to Unruh and her ilk) de-feminizes them (us) as is a form of self hate because it would liberate us from what is, after all, a mere "inconvenience."

For me, menses and the possible use of Lybrel, is more than simply ridding myself of an "inconvenience" but freedom from enslavement. (I posted why as a comment on Pandagon The source of our collective delusions may be summed up in one sentence, if you want to read why, you'll have to go there). To hear Unruh call Mary Alice Carr a liar when she tried to talk about women like me, was really more than I could take.


Around 11:02am fellow Pandagonian, Djinna, commented on how someone on Pandagon (she thought) referred to Dolores Umbridge [Harry Potter charter, Order of the Phoenix], helped get a mental picture of Leslee Unruh . I was delighted because I believed, as still believe, it was me, as e I had made the comment weeks before that while reading the transcripts of some wingnut commenting about something or other on Pandagon, I couldn't help but read it in Dolores Umbridge's voice. I didn't know then, how many would get my reference.


Well soon the comments were rife with Leslee Unruh being referred to as [Dolores] Umbridge. I laugh whenever I think about it, because the comparision is not without good reason. 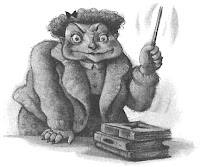 
[Chapter 8] "He thought she looked just like a large pale toad. She was rather squat with a broad flabby face, as little neck as Unlce Vernon, and a very wide slack mouth. Her eyes were large, round, and slightly buldging. . ."

". . . The witch spoke in a fluttery, girlish, high pitched voice that took Harry aback; he had been expecting a croak."

She is also descirbed as having a false sweetness and sincerity of concern in her voice. 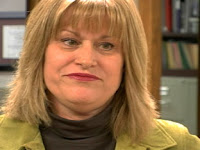 Dolores Umbridge seeks total control of the students and teachers at Hogwarts.

Lesless Unruh seeks total control over a woman's body and her reproductive health and rights.

Both of them subvert and suppress the truth to gain and maintain that control. And it is that sad truth for which the comparison is aptly made.
Posted by Clytemnestra at 6:42 PM 2 comments: Links to this post

A dose of guilt with your "free" Marine Windbreaker

This is a deck of 12 cards my son received from the Marines last week. As you read through them, partaking of all the emotional manipulation going on in them, please think of Andrew Madison Rove (son of Karl Rove), the 5 sons of Mitt Romney, Paris Hilton, Jenna and Barbara Bush (they could serve state side), any and all Young Republicans (especially those in college and there a lot of them) who have not and are not serving.

Doesn't the priviledged, upper class think that our way of life is worth protecting, that they need to do their part, or want to make a difference? They that benefit the most from this way of life.

The cards are presented in order (there is a number on the bottom right of the back of each card. To see the larger version, click on it. The band that held the cards has the directions.

Cards 11 and 12 do not have a number on them so it is impossible to tell which order they belong in. Attached to each card is a perforated Business Reply card asking for name, address, phone number, cell number, date of birth, email address (you can check a box for them not to send you anything via email), name of school, last grade completed, and the size for your free windbreaker (offer expiring 7/31/2007).

Interestingly enough on this post card (which anyone can read as it is being handled) is a "Privacy Act Statement." All the information provided will be used for recruiting purposes only.

Look for more as we go into Bush's second surge to get us to 200,000 troops in Iraq and a plan for us to be there 5 to 10 more years. It is beginning to look enough like Viet Nam yet to you? Or do we need to get to 200 dead American service persons a day? We are now at 5 a day.

Update:Cheap skate Marine corps chose to let our Marines die from IEDs rather than give them the equipment they needed

Posted by Clytemnestra at 7:10 AM 4 comments: Links to this post