I am in awe of this man

Posted by Clytemnestra at 1:50 PM No comments:

Quite A Little Harem

In June of 2006 I postulated that Harriet Miers and Pres Bush may have something going on considering how she gushed and giggled like one in love about and around him. Then the Condi and Bush possible affair came to light and my postulation seemed even more plausible. 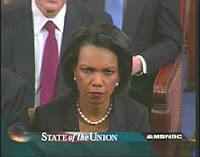 Plus there were the rumors of both Condi and Harriet being gay or at least bi.

Since the election we have learned that Harriet is leaving the staff of the president. And last night during the State of the Union speech Condi looked pissed.


After the speech we were witness to Rep. Michele Bachmann (R-MN) touching President Bush for a rather long time. No secret service to break it up, and no seeming irritation from the Pres. This has left many to wonder if there is something going on between Bush and Bachman and another possible explaination of why Condi looked so angry last night.

So I decided to redo the original graphic. From this:

Posted by Clytemnestra at 8:26 PM No comments:

No Child's Behind Left

From Bush's "state of the union" speech

"Now the task is to build on this success, without watering down standards .... without taking control from local communities ... and without backsliding and calling it reform…And we can make sure our children are prepared for the jobs of the future, and our country is more competitive, by strengthening math and science skills."


Excuse me while I finish retching. . .

Our drop out rate is higher and growing since kids feel that they cannot pass due to high stakes testing. Teacher's are teaching for the test and there is no REAL learning going on, only regurgitation. Control was already taken from local communities.

We have fallen behind in math and sciences because NCLB does NOT encourage learning NOR take the time to teach them and it has NEVER been funded fully or properly. (How much $$ from Bush's war should having gone into education? We are having a science brain drain because we are now perceived in the world, thanks to the anti intellectual and no curiosity president and the “intelligent design” farce that he encouraged we are behind where we were before NCLB.

Our children are suffering from lack of social time in school, recess given up for NCLB, etc.

1. He would either scrap NCLB or fully fund it
2. He would require music education in all grades and fully fund it
23 He would include of seek for inclusion requiring gym class to be a five day a week mandatory class, to help combat our epidemic of childhood obesity. And he would make sure it is fully funded.
Posted by Clytemnestra at 9:20 PM No comments:

Hillary's handlers are already failing her

Now I am willing to admit that I may be irritated about this ad soley because of James Carville and Paul Begala. I do not like them and I find this ad of arrogant and annoying

I mean really, was the conversation not already in progress before Hillary threw her hat into the ring? Haven't we in netroots and the grassroots(readers, bloggers, and activists) been discussing the future of our country already?

"Let the conversation begin"???? Hillary's stances on the war, etc. have made her late to the party. She's playing catch up. This is where her handlers are going to mess up her campaign and maybe our chance at the presidency. Democrats are too willing to give this a pass, no knowing or understanding that is it this very framing of words that gives the Republican's power to paint her as an aloof, uncaring, arrogant, shrew.

She is reportedly a very warn, caring, and genuine individual. If her handlers are going to continue with these kind of statement of the presumptive heir, well it's lost before it's begun.

But then again, it may just be me who is totally put off by this ad.

I am writing you this open letter because you have now formed an exploratory committee for the office of the President of the United States.

I wish you well, however from this side of the aisle I want to make something clear.

I fully believe and blame our loss of the House and Senate 12 years ago, and the loss of the Presidency 6 years ago on your husband and his campaign administration, this includes James Carville and Paul Begala. Triangulation is only good for one campaign cycle and then is can’t be used again for a generation.

It can only be used once, after that it allows your opponents (and they have radio stations and microphones) to define what you are and your party is, without being effectively and locally challenged. People remember being "snubbed" and ignored. This allowed Limbaugh and the like to use the term “fly over country” to make the populace feel unimportant to your husband and his administration. It allowed those who are diametrically opposed to Democrats to paint the party as elitist and people who only believe that certain places were important. Your husband administration did nothing to counter that.

Howard Dean (who Carville and Bagala have maligned), however, believes that we must be on the ground in every state and hamlet letting people know who we are and that we must define ourselves. His vision is combined with our upsurge in recognizing that we also must have the platform of talk radio are major reasons we now have the House and Senate. He’s the one who brought us to the dance, and I believe you need to remember that.

Forgetting that you seem to be the darling Democratic candidate of the right, which I am highly suspicious of, getting advice from any of those I and many progressive Americans feel are the reasons we lost the House, the Senate and the White House will cause great alarm and re-evaluation.

If you do get the nomination and if there is any hint of the business and triangulation used in your husband’s campaigns. I will do something that I said I would never do, vote for an independent candidate. I’m not alone in my feelings about this and I believe the netroots would do and endorse something similar.

You carry the baggage of your husband’s failures; please do not make the same mistakes.
Posted by Clytemnestra at 6:44 AM 2 comments:

Only Neocons May Apply

Last night I was watching Deep Impact" the 1998 movie about a large comment heading for earth. So large that it is classified an E.L.E. or extinction level event. To save humanity nations were building under ground cities to be inhabited for 2 years. These cities also included a (hopefully) mating pair of many different species of animals. The name of the USA cave was "Ark II." The movie starred, among others; Robert Duvall, Téa Leoni, Elijah Wood and Morgan Freeman as President Tom Beck.

The US cave would house 1 million people; 1/5 or two hundred thousand (200,000) of those would be "pre-chosen" scientists, artists, soldiers, doctors, politicians and other officials. The other 4/5 (or 800,000) spaces would go to Americans chosen by lottery through their Social Security Number and no one over the age of 50 would be eligible for the lottery.

While watching I began to compare and contrast my feelings from the movie to how I felt the same situation with the same E.L.E. survival conclusion with the present US government. Besides the fact that listening to Morgan Freeman (whom I have listened to since 4th grade as "Easy Reader") is far more pleasurable and assuring that listening to President G. W. Bush, I knew that the lottery wouldn't really be a "lottery" with everyone under 50 years having an equal chance.

No, given this administration's record on cronyism and the poisonous neocon ideology, only those who were rich, or registered as Republican could get in, with a small (maybe 50,000 to 100,000) poor and middle class to clean and make sure the joint runs correctly. In fact they'd probably privatize it so the only way you could get you and your family in is to buy their way in, and there would be no age restriction on that. The mega churches would probably buy the way in for thousands of their leaders and members, Jews would be allowed to buy their way in (though secretly they'd probably have a quota) but any Muslim (unless they were of course connected to the Saudi Royal family), Hindus, Wiccans, Pagans, Gnostics, Sikhs, Zoroastrians, Buddhists, etc. need not apply. The poor "white trash" who goes to an Evangelical church, can do the clean up.

And then, just like in New Orleans, the neocons could repopulate the US with like minded souls.

Q.Do I really feel this way?
A.Yes, unfortunately I do.

Q.Did I feel this way in 1998?
A.No I did feel that things would be egalitarian.

Q. Do you think you can trust any US government administration in the future would be egalitarian with a real lottery selection process?
A. No, because for me, the Office of the President, has lost credibility. As Keith Olberman put it in a Special Comment directed to Bush; ". . . you are loosing the credibility, of not just your presidency sir, but more importantly of your office itself"

But this is a neocon tactic, and even knowing this, I still couldn't keep it from happening in my own mind.
Posted by Clytemnestra at 9:25 AM 2 comments: