To Willingly Burn an Organ in Your Body

Way back on May 24, 2007, Amanda Marcotte of Pandagon posted "The source of our collective delusions may be summed up in one sentence"

The “controversy” over the FDA approving the pill Lybrel, which is just a non-stop birth control pill that stops your period, speaks volumes about Americans’ general back-assedness. Women in other countries have been using pills to stop the inconvenience of having periods for something like decades now, but Americans, we have to freak the fuck out over this. A nation of techno-lovers can turn into a nation of Luddites at the very hint of women benefitting from technology in any way. At Feministing, Ann found that ABC News is already running with the “bitches are out of control” angle. This is the titular sentence that diagnoses our collective insanity: . . .

She included this clip from "Your World with Neil Cavuto"


Here is my first response to the clip:

WARNING – DO NOT READ THIS IF YOU ARE SQUEAMISH

My period is so heavy that I run through a Super Plus Tampax tampon in a 1/2 hour .. and I do this for 3 f-ing days straight. And have done this for 11 years.

I have been to doctors and specialists and they won’t give me a hysterectomy because it’s a “healthy” organ. My own reason is that I feel orgasms in my entire uterus, not just the cervix, so I kind of don’t want to become the “female eunuch.”

I have been hospitalized for hydration issues and anemia issues because of my period. I cannot hold a full time job at this point in my life because I would spend all of my vacation time, all of my sick time and then some on the f-ing toilet.

I may not be able to handle this pill because I couldn’t handle the progesterone I was given to help shut down my period, but leave me with a uterus. But I’d at least like to be given the opportunity to try this drug.

So take your blonde from the bottle empty head (that I am ashamed to know that you and I hail from the same ethnic location) and stop interrupting when Mary Ellis (? correction needed) is telling THE TRUTH.

I LIVE WITH THIS! IT EFFECTS EVERY FUCKING THING I DO and DON’T GET TO DO!
(like going out for a picnic with my family, etc.)

P.S. until you propose to pharmacologically castrate 13 year old boys so they can’t run a run and screw everything that moves - don’t you dare make girls bare the sole responsibility for hormones you misogynistic twits!

I deleted a bunch of stuff from my post about my period that I now think I should have left in. Because it not only effects me it effects those who live with me.

Like my husband who shares the bed I sleep in - one that looks like someone was murdered in it. After this last menses I had to wash our sheets three times before I got any headway on the stains.

He also deals with “3 night a week pogo” as I am up and down throughout the night trying (in vain) to stay ahead of things. I get no sleep which makes me real pleasant to deal with. (think PMS on roids)

Everyone in this house get’s to deal with the mine field of chux placed anywhere and every where I sit during my period so “I” don’t ruin the furniture (that one is really good for the ego).

They get to deal with an out of commission bathroom while I clean it up because while I just averaged filling a super plus tampon every half an hour truth is that is the best case senario. Generally I have an accident which lets me know it’s time. I must then clean the bathroom floor, the toilet (seat and outer bowl and pesdestal) and the shower after each use.

Wearing black in the summer time is oh so pleasant.

On the up side, and Ms. Unruh should be very pleased that the lack of finding a way to meadically reduce my flow, sans surgery, has convinced all four of my children that it is due to the somewhat larger than normal family we have. I don’t believe any of them, if they decide to have children will have more than 2.

My rant produced some good results Wayward suggested this:

Clytemnestra - I believe there is a new procedure where the doctor cauterizes the uterine lining. No periods (or extremely light periods) and no hysterectomy.

You may want to talk to your gyno about that.

After hearing this I resolved to find a new gyno along with a new primary care doctor. My gyno had retired years ago and my primary doctor was retiring at the end of May 2007. I decided, however, to wait a few months until after my sons' summer vacation.

My new gyno, this time a woman, I don't know why I went with a man the last time, and I discussed more options when she came to ablation. I jump on this immediately. We discussed this some what. They use an ablation therapy called Novasure. We talked about the possibility that since I have had a tubal ligation sometimes that area is burned more and becomes a source of chronic pain.

We also talked about the possibility of loss of sensitivity, which is small. But ablation can make it harder to detect cervical cancer.

So I made an appointment for another round of testing. This one is a more in depth ultra sound where they fill the uterus with fluid looking for fibroids. After that I will have another meeting with my doctor to decide if this is something I really want to do.

I have begun reading the pamphlet given me:

Stop living with heavy bleeding.
A heavy period isn't normal.
More than 7 million women in the United States suffer with a very heavy menstrual period each month. This can have a major impact on their lives. Consequences of a very heavy period can include severe pain, fatigue, embarrassment, and iron-deficiency anemia. A heavy period may be caused by such conditions as fibroids, polyps, and hormonal changes. . .

About Heavy Periods
Do you suffer from heavy bleeding?
Does your menstrual cycle seem abnormally long or heavy? Are you afraid of leaking through a pad or tampon? Have you been diagnosed with anemia from blood loss? If so, you may have menorrhagia (pronounced: men-o-rahj-ah).

Menorrhagia is defined as unusually heavy or long-lasting menstrual periods. It occurs in 1 out of every 5 women.

1 in 5????? If this is so prevalent why didn't anyone publicly call out Leslee Unruh on her absurd statement? How many woman are too embarrassed and never brining it up to their doctor? It took me years before I even told my doctor, thinking it was the price of having 6 pregnancies.

I can't hold a job because of my periods. What do women do who have a job but have no health insurance? Wear diapers during their menstruation cycle? I know that every time we had to change insurance companies I would get nervous what we would get denied due to a preexisting condition. Thankful that at least we live in Massachusetts so I would always have insurance some how.

So now while I read everything it is hitting me, I will be "burning" an organ. All the good and bad implications clear. Tto help myself, to get my life back, I may have to "harm" myself. 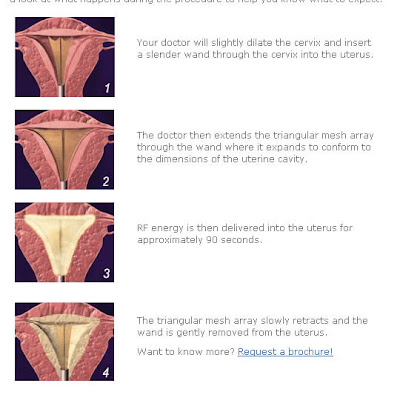 and "thank you" wayward!