There is an active movement spurred by Paris Hilton being released from jail after 3 days of her 44, I mean, 23 day sentence, to boycott all Hilton Hotels and all Hilton holdings.

Remember when Bush addressed the top 5% as his constituents. Well, these are them. Maybe, just maybe, Paris Hilton and her early release for imminent mental breakdown (and how many middle class and lower class people got "house arrest" for it (she can't go out for parties, but they can come to her, and her bed will still be made and room will still be picked up by her made. etc. real tough sentence, huh!) Maybe. just maybe this will finally spur the American majority to action in calling for and forcing fairness, and an end to policies/tax breaks etc. that benefit the upper 1-5%.

These policies that force the window wider and wider between rich and poor. Policies that are making more and more Americans poor. These polices of the Bush administration and the 6 years of total Republican rule have moved us back into the Robber Barron economies and social structure of yester year. And isn't it interesting of a party that "triumphs" small business are more than happy to destroy small businesses with big box stores, multinationals, big businesses.

I'm not a fan of Bill Clinton, but at least we had more people entering the upper class and more people leaving the lower class under his watch than we have had with Bushco.

So, if Paris' troubles and basically a release from her already light sentence help spur a sort of "proletariat" revolt from the Robber Barron Republicans, Administration and Party to a fair and just system ...

For more information read the comments on ANY TMZ.com posting about Miss Hilton's release.
Posted by Clytemnestra at 1:39 PM 1 comment: Links to this post

Bush wants war with EVERYONE

Afghanistan (justified, but we are failing at due to Bush’s Iraq quagmire), Iraq (illegal and unjustified), Iran, North Korea, Russia, etc. etc. etc. etc. Along with our loss of respect and standing in the world, earns Bush the title of “God of War.” 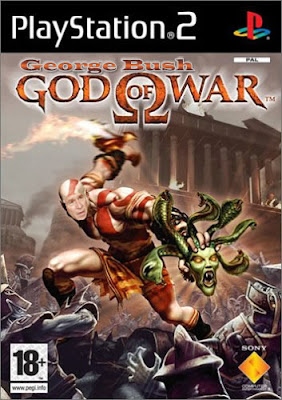