The shame of our unneccesaary illegal war. You need to know why.

No matter if you beleive, believed, or never believed in the Iraq War, this is a movie EVERY American needs to see. You can be damn sure the rest of the world will.

If any American ever asks why teh middle east is the way it is and why do *they* hate us (why does the world hate us), point them to this movie.

BillO and delusions of grandeur.

"We expect Hillary to get the nomination".

This reveling in many ways. Now it's will be no surprise that he is probably an active part of the network of neo-cons trying to make sure Hillary is the Democratic nominee (they will probably encourage cross over voting considering their lack luster choices thus far -- and helping to ensure who their sorry candidate will face) because they feel that Hillary is so polarizing she'll be easy to beat.

It also illustrates just how inflated his own ego (we already knew that), but how far in delusion he his falling. 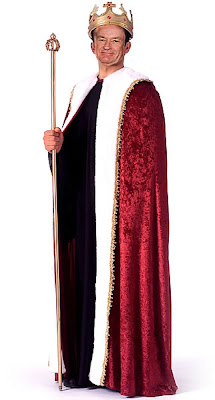 Posted by Clytemnestra at 2:09 PM No comments:

Of Pigs, Condoms and O'Reilly

Bill O'Reilly (or as I've seen him referred to on some blogs, "Bildo") is upset over a condom ad featuring pigs.
Oh the irony 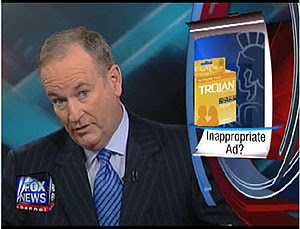 See also:
Once more with feeling
and
On pigs, basketball, frames, and music

Posted by Clytemnestra at 4:43 PM No comments:

Get out the drapes John, there are nude people available for FREE viewing!

My parents and my sister flew out from Colorado for my eldest son's graduation and we did some "touristy" things. My parents have traveled through Europe and parts of the old Soviet Union extensively (before and after the fall of the Soviet Union). They cried over the destruction of the beautiful city of Sarajevo and have not been back since reconstruction. So it was hard for me to understand the desire and request to visit the mansions of Newport, RI. But we went and were able to only visit "The Breakers," due to our dawdling and drives through this beautiful and luch green area. (the scale of which is not seen in Denver and most of Colorado).

My mother is retired, and was once director of a public library. Among all the places we visited as when I was a child and their trips outside the country one of the places on the itinerary has always been libraries. But some how though in the decade plus that my family (husband and kids) has lived here we always missed taking my Mom to the first public library in the U.S. The library is in Franklin, MA, so this time we visited.

Franklin, MA was named after Benjamin Franklin, March 2, 1778. The library building itself was built in 1904, but the collection and it's establishment as a free public lending institution began in 1790.

As we were heading up the steps to visit this very beautiful library I overheard my father say, with great distain, that Republicans would like to privatize public libraries and charge for the "privilege" of accessing knowledge. Once we entered the library and walked into the reading gallery we gazed at the walls that were covered with murals with women, mostly only clothed from the waste down. And I couldn't help myself but to remark that this would shock Senator James Inhofe. He was a constant punch line throughout their visit, especially when we discussed energy, global warming and the want of a wind farm off of Nantucket.

From the pamphlet from the Franklin Library Preservation Committee: 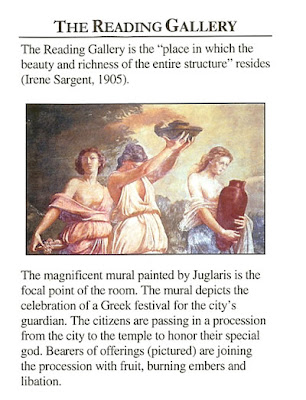 According to local folklore, flowing robes were added by Juglaris to some of the subjects on the murals. The nudity offended some of Franklin's residents.

I don't believe I saw any completely nude paintings. I wonder if there were any before, but there are plenty of nudes from the waist up. I guess we will never see John Ashcroft in this library, even to visit the first public lending library in the U.S.A.

Oh, I forgot, it's free, operated by the government (albeit it local, but taxes still go toward it) and for the public good, so you wouldn't see any republikkkans there anyway.

Posted by Clytemnestra at 8:21 AM No comments: