It's offical; Dominionists for Huckabee

Not that this is a surprise, he is one himself.

Mike Huckabee, the Republican presidential candidate and former Southern Baptist minister, is getting help from Tim LaHaye, the Christian conservative organizer and co-author of the apocalyptic “Left Behind” novels.

“America and our Judeo-Christian heritage are under attack by a force that is more destructive than any America has faced” since Hitler, Dr. LaHaye and his wife, Beverly, wrote in letters sent to lists of conservative Christians in Iowa, New Hampshire and South Carolina. “Defeating the radical jihadists will require renewed resolve and spiritual rearmament by the evangelical pastors in America.”[..]
C&L

He said this a week or two ago (crusade picture photoshop mine): 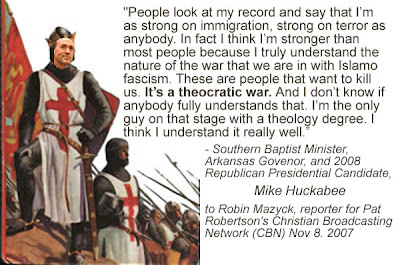 Since he bascially, and stupidly, arrogantly, recklessly (and I could add many more disparaging adverbs) declared our "war on terrorism" to be a crusade I went all the way in the photoshopping because you know this is the way Mikey sees it. 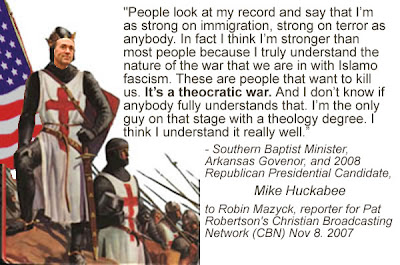 I don't support the way we've dealt with terrorism, vis a vis "our ever expanding war" that took our eye off Afghanistan. We are making the world, especially the middle east a fully chaotic and disabled quagmire.

People don't like chaos, they, especially families, like stability, timeliness and no surprise futures. That's why a great deal of energy and time is spent in these areas maintaining the status quo, even in families. We threatened more destabilization through war and they will naturally flock to those who promise to uphold stability and their family and very conservative values, Al-Qeada, et. al. Which means we are xreatring and will continue to create more terrorist and be Bin Laden's largest recruitment tool.

It's human nature, we do it here. We see the world become more chaotic, less predictable, less secure and church attendance, especially conservative church attendance climbs. We flock to leaders who spout tough messures, "law and order," and cowboy diplomacy.

If being a Dominionist isn't enough for you to disqualify Mike Huckbee as president, maybe he reckless nature should be.

Dominionism: Be Afraid. Be Very Afraid.

Five Things Mike Huckabee Doesn't Want You to Know About Him

Dr. Bruce Prescott (Mainstream Baptist) - or as I like to say "voice from the inside" - A Reconstructionist Takeover Video, All "Recontructionist" Posts (including those on Huckabee)

From me: Representative Republic or Dominion, My Dream, My Nightmare

Posted by Clytemnestra at 11:31 AM

I checked out your site and liked it. Found it from CrooksandLiars.com. Would love your feedback on my site. You can find it at skewz.com. Thanks.

Huckabye? He's toast I think. According to his latest statement, Huckabee seems to want fundamentalism. It could never happen, even if Huckabilly really wanted to do it.

Huckleberry is too conservative on religion and too liberal on criminals and the economy and immigration.

Huckabye? Huckabee wants to have adulterers, homosexuals and rape victims stoned to death. He also wants to make alcohol and music videos illegal, and make women 2nd class citizens and to take all girls out of school?

Oops, my bad, that's another 'religion'.

Hey, anybody but the PIAPS!

if you’re MAD
punish your country
VOTE for Hillary
.

who cover for their husbands
who rape other women
.