Kansas has been in the news for the past few months because it seems it would teach religion in Science class than Science. Red State Rabble chronicles all of this.

I keep waiting for all the other religions in the USA who have creation stories different than the Christian Creation Story repackaged, camouflaged and perfumed with Rosewater, Intelligent Design, to demand equal time in KS science classrooms. The way the decision is written ALL creation stories must be taught in the science classroom. So far the only religion to demand that their beliefs be taught along side ID in KS classrooms is FSM.

The idea to get all religions represented in KS science classrooms is not to totally remove any hint of science, but to have the whole thing either:

1. Crash under it's own weight; there-by bringing back science into science classrooms

2. Or, if a religion creation story is excluded in from the KS science classroom, those sponsoring would file to show cause. This will probably legally show the Christofasict bias and intent of putting ID in the classroom. It would then be struck down by legal challenges.

What maybe even greater evidence of how Kansas, in tornado alley, wants to ignore science and stick it's collective fingers in it's collective ears, there is still only one 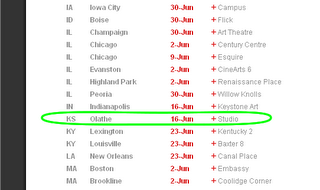 place in KS that is showing "An Inconvenient Truth"

Olathe is in the eastern part of the state, a suburb of Kansas City, KS (also Kansas City, MO). Not even Wichita, which is in central Kansas, and who used science to convict BTK (and this), is showing "An Inconvenient Truth," at the time of this writing.

Makes one want to drop a giant cup of coffee over the whole state.

Posted by Clytemnestra at 3:52 PM

Great blog parody to be found at: