The Noble Experiment Is Over 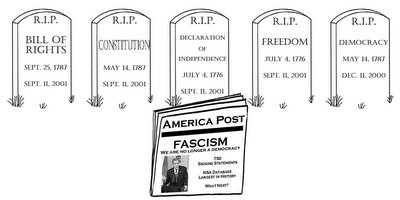 Posted by Clytemnestra at 8:22 PM

Only we can revive it. We may have to wait until after the wake, though, for some people to get over their hangover brought on by overindulgence in jingo juice. We will, and are, in the process of realizing that there is a crisis. Homo-sapiens seems to wait until there is a crisis before we are willing to face the cause and purge it.

How stupid. The real threat of fascism in this country comes from the extreme leftwing totalitarians who believe in speech codes, hate crimes legislation, environazism, veganism, socialism, nihilism, and all the other various leftwing-totalitarian ideas. There's also the fucking anti-gun nuts who want to throw out the 2nd amendment. Don't give us this bullshit about how America is dead because half of us aren't willing to let arab muslims murder us because of white guilt. Ram it!!

George Bush: saving your hippy-ass whether you like it or not.

"Those who exchange liberty for security will soon find that they have neither." - Benjamin Franklin

You're 26 and into landscape design, so you are certainly able bodied enough to go fight in Iraq. Your president needs you.

BTW, Mehtab, who occasionally posts on this blog is Muslim and an American by birth .. though she's not here, I will speak for her and employ a "Cheney-ism" -- Go F@ck yourself"

If blitz is uncomfortable with the word fascism, then how about post-constitutionalist kleptocracy? After all fascism's claim to fame was that the trains always ran on time. The cronyism at work here doesn't care about trains beyond selling them to friends of the power wielding elites.

Thank God for True Patriots like Blitz who are protecting us from the depredations of those damned evil vegans! Those leafy green eating terrorists will outlive us all!!

The only "white guilt" I feel is being associated, via skin color, with bed-wetting mouthbreathers like, well, Blitz again...

Don't look know but there's an Islamofascist under your bed!!

Oops, better get the smelling salts (and some Lysol).

Molly Ivins wrote in her book "Who Let the Dogs in?":
“Fear is at the root of most evil…. These dotty proposals to breach the Constitution fall into that category. We cannot make ourselves more secure by making ourselves less free. According to reporting in the Los Angeles Times and The New York Times, the terrorists got in and stayed through loopholes in the visa system, not some fundamental flaw.(Ivins, 227)”

Bill Moyers agrees in his article "One Year Later", written on the first anniversary of 9/11:
"[The terrorists] win only if we let them, only if we become like them…. If in trying to save democracy, we destroy it; … if we show contempt for how others see us, exploit patriotism to increase privielege, confuse power with the law and secrecy with security; and if we permit our leaders to use our fear of terrorism to make us afraid of the truth….. Democracy is our work, and there is much to do if we are to keep it. (Moyers, 1)"

This administration hypocritically is attempting to spread freedom abroad by restricting it at home. Yet in a nation based around a system of checks and balances, we have one final protection to our rights and liberties: the masses. As Samuel Adams once said:
"If a time should ever come, when vain and aspiring men shall possess the highest seats in Government, our country will stand in need of its experienced patriots to prevent its ruin. (Adams, 91)"